Home Motherhood Dear Moms Raising Black Sons, I can’t Imagine. (because I don’t have to)

Dear Moms Raising Black Sons, I can’t Imagine. (because I don’t have to)

I’m a white mom raising a white son. I worry about him constantly. Because that’s what Moms do. I think about his safety, his health, and his happiness on repeat all day every day. Just like you.

All Moms worry. Well, good ones anyways. It’s one of the things no one really tells you about Motherhood: how much you’ll worry.

My son is young, so my worries for him now are about whether I make him feel loved enough, keeping him healthy, raising him to be kind & confident, and keeping him safe. The same worries every Mother has for her child.

As he gets older, I’ll worry about my son falling in with the wrong group of friends. Or getting made fun of or bullied. Or trying something he shouldn’t. I’ll worry about him being careless with his life.

In those ways, as Mothers, all our worries are the same.

But in other ways, they couldn’t be more different.

But where my worries end, a terrifying set of worries begins for Moms raising black sons.

Worries I can’t imagine. Because I won’t have to.

Worries you shouldn’t have to imagine. But you can imagine them simply because you can’t afford not to when your son’s life is at stake.

When my son is 12 or 13 and leaves to go ride bikes with his friends, I’ll say, “Be careful.” And I’ll mean it. I’ll tell him that because cars might be going too fast and not paying attention. Or because if he falls he might hit his head. Or maybe because it will be getting dark out soon.

I’ll be thinking about all the things that could go wrong. Anticipating them before they happen.

I’ll be being a Mom.

What I won’t be doing is worrying about someone being suspicious of my son riding his bike just because he’s a white boy. I won’t worry about some resident calling the cops because they think he’s up to no good—for absolutely no reason. I won’t worry about my son getting followed by the police because a white kid stole a candy bar from a gas station & he “fits the description” just by being a white male.

You’re a mom raising a black son, so you will be worrying about every single one of those things.

But you’ll also be worried about other things. Things that only Moms raising black sons have to worry about.

Many of my worries for my white son are the same as my fellow mama’s worries for her black son. We’re both Mothers, after all. And with Motherhood comes some of the most beautiful, strong solidarity you can imagine.

But I also realize my worries for my white son are a fraction of a mama’s worries for her black son.

A Mom raising a black son carries double the load of worry & fear for her son than I have to carry for mine.

Things I will never have to think twice about with regards to my own boy will be the very things she can never stop thinking about.

I can barely handle my own worries for my children. I’m not sure I could stomach even one extra worry, much less a whole other set.

But you do that daily. For no other reason than because your son has darker skin than my son.

That’s it. Just color. It’s nothing.

It’s nothing and yet it’s everything.

How can something that’s such a nothing change everything?

Because we have let it.

And because of the extra worries and fear for your child that you have to live with daily, I wouldn’t want to be.

And that tells me everything I could ever need to know about racial injustice.

Want more on Motherhood? —> You know all about that #BOYMOM life, don’t ya? Are you a SAHM? Have you ever yelled at your kids?

Pin this for later 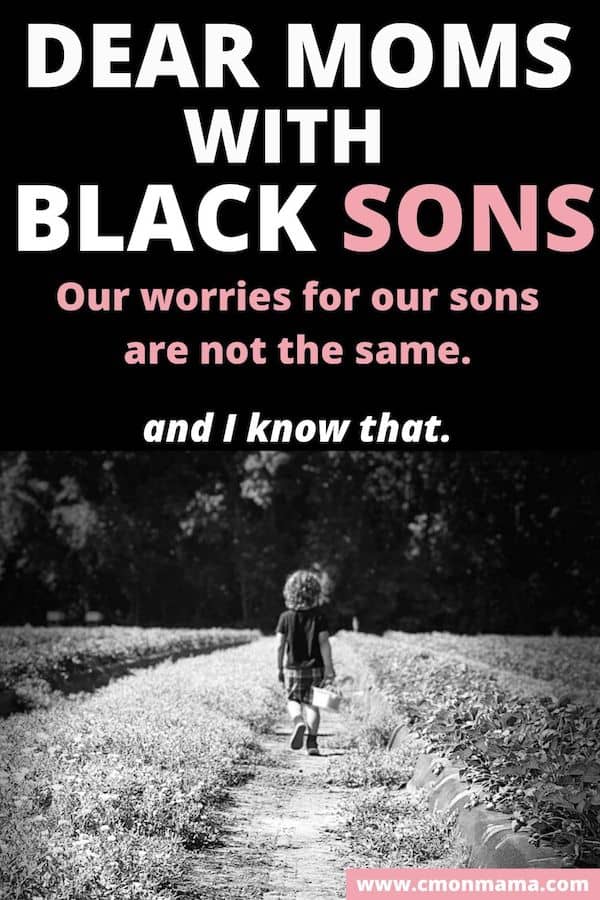 Yes, Kids can be totally Ridiculous (but so...

Sometimes TV is Exactly what Our Kids Need

A Stay at Home Mom gets Everything &...

The perfect guy DOES exist. Just ask a...

Others have worn masks daily for years. Now...

“The Days are Long but the Years are...

It’s not actually easy but i am really happy to know mothers raise black sons. Proud of you all

Me too. Proud and in awe.❤️

There’s so much that needs to be said here. It’s just unbelievable that we’re even having to have these conversations in 2020. I keep thinking that we’re past all of this and improving as a world, but the ugliness just keeps rearing it’s head. Hopefully our children will right some of these things and true equality will finally exist.

Yes Yes Yes Yes Yes. I, too, find it so hard to believe that we are having these conversations in 2020. Kind of mind-blowing really. I can’t shake thinking about how much I worry about my own children and my own son and how mothers with black sons have so many extra worries. I don’t know how they can carry that weight every day. It’s unfair and it breaks my heart.

They call me mama

And that's exactly who I am.
I bet it's who you are, too. It's silly to act like Motherhood shouldn't define us. It's the most powerful thing in the history of the world. Let's hope we're defined by something that epic. ❤️