My son is obsessed with all things Superhero, so a Superhero Birthday Party was a no-brainer.

Being a Boymom is fun. (I’m also a Girlmom. I get the best of both worlds). I’ve never in my life known as much about Superheroes as I do at this point in time. I can talk heroes, villains, specific powers, plot points—you name it. My son lives & breathes Superheroes & this was a BIG birthday for him—a whole hand! 5!

So, I went all in & we had the coolest Superhero Birthday Party ever (according to the sea of 5 year old boys & girls…and the parents, if I’m being honest.)

He has a special affinity for the Avengers and all the Marvel superhero characters, so this party was an Avengers Birthday Party. But, you could use the ideas for any Superheroes your kiddo is into.

As always, I turned to Amazon Prime. So no worries, Mama, you can throw an epic Superhero Party together quickly—in two days to be exact. 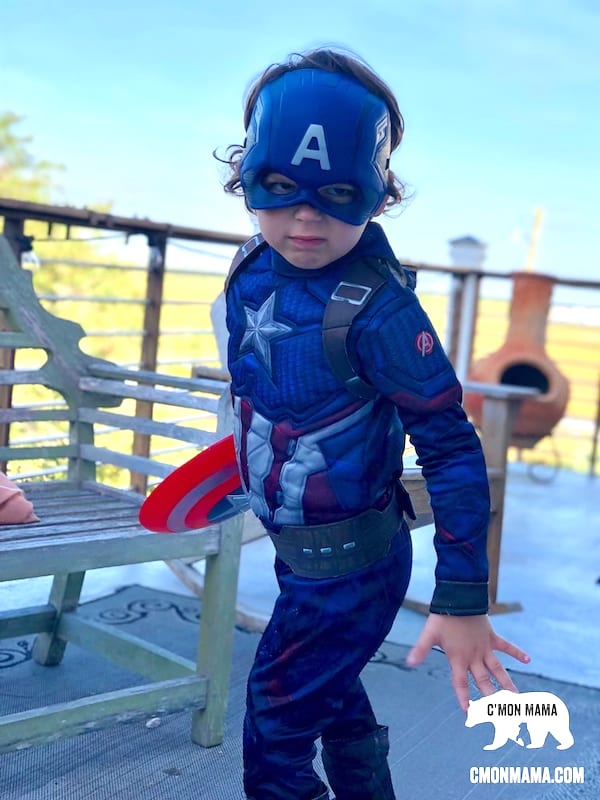 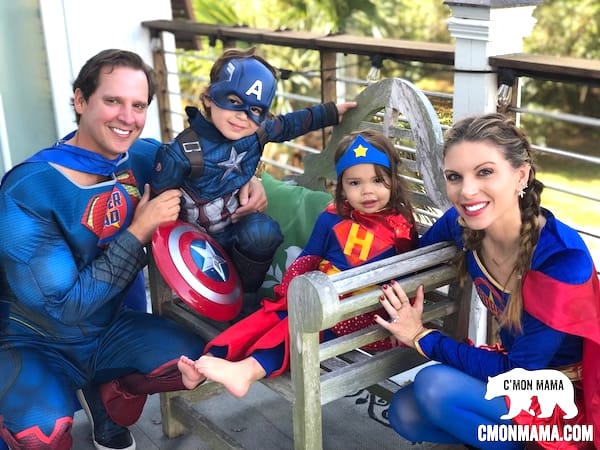 More details on our costumes below the next pic! 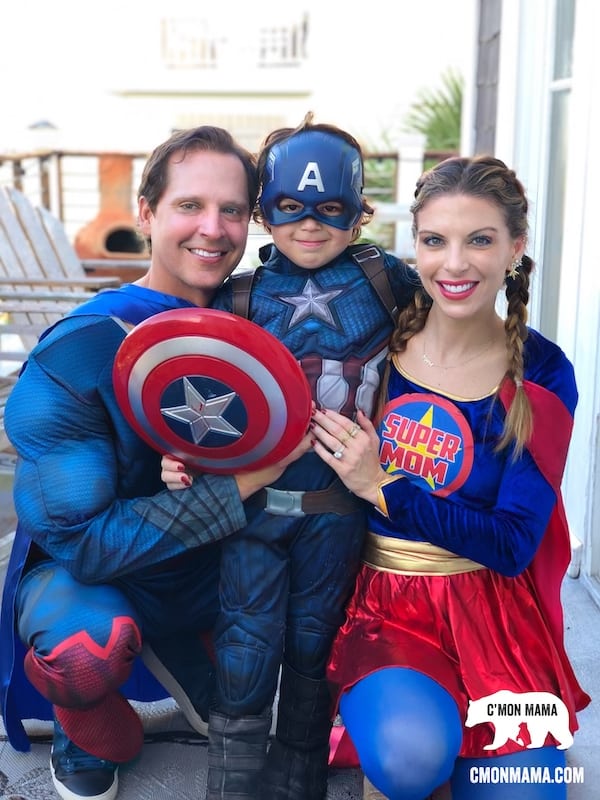 For our Super Mom & Super Dad costumes (& for the custom H on my daughter’s costume), I used iron-on transfer paper & just printed the design I wanted, cut it, & transferred it via iron. Be sure to get the iron-on paper made for dark materials linked above—the one for light fabrics won’t work! I ironed “Super Mom” & “Super Dad” decals on the front of our costumes (literally just covered up the Superman emblem) & on our capes. SO CUTE!!!

(We actually had a “Super Baby” Birthday Party when my now 5 year old son turned 1 & I made these costumes then. They’ve held up for 4+ years! See throwback pic below.) 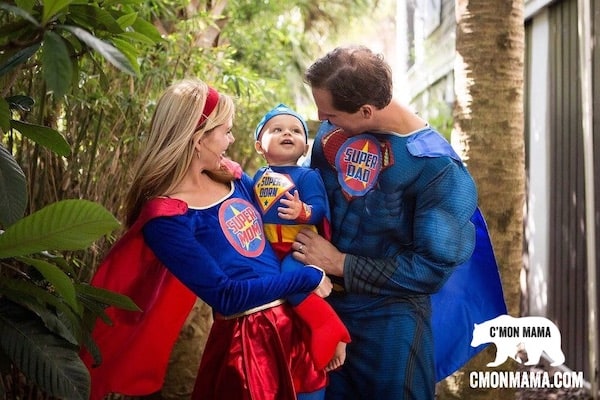 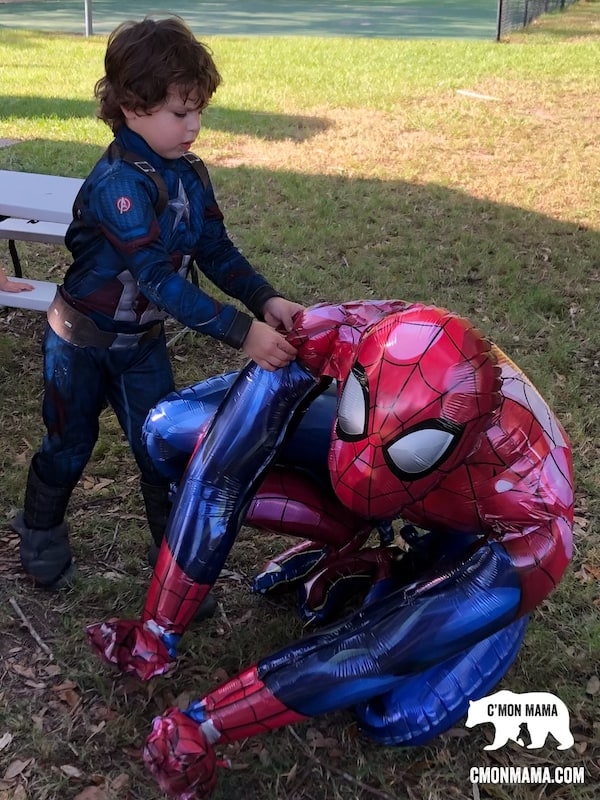 This thing is HUGE & it was a HUGE hit! The kids went wild over it. We blew it up with the little straw it comes with so it would be a “walking” balloon as opposed to a floating helium balloon. You could do it either way, but it was so fun to have Spidey down on the ground for everyone to interact with! 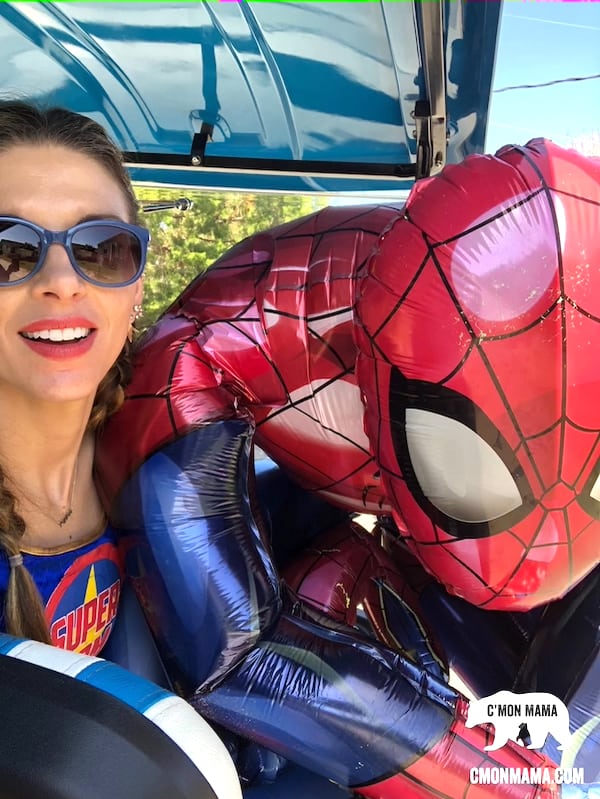 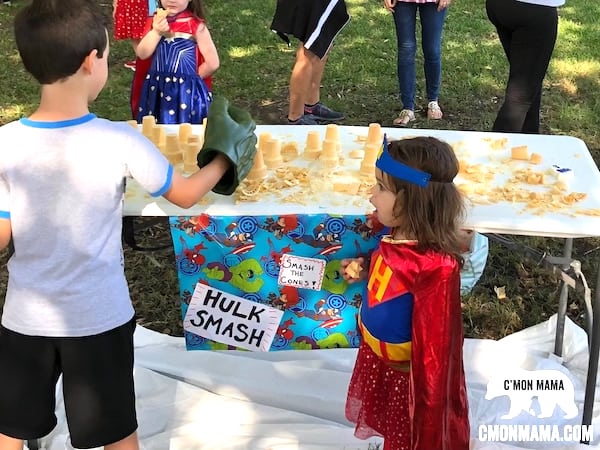 The HULK SMASH game was the (first) highlight of the party. The kids had a BLAST with this! They couldn’t get enough & it was SO easy to put together! All you need are the cones & gloves (linked below!) & then just let them go wild like the HULK would. 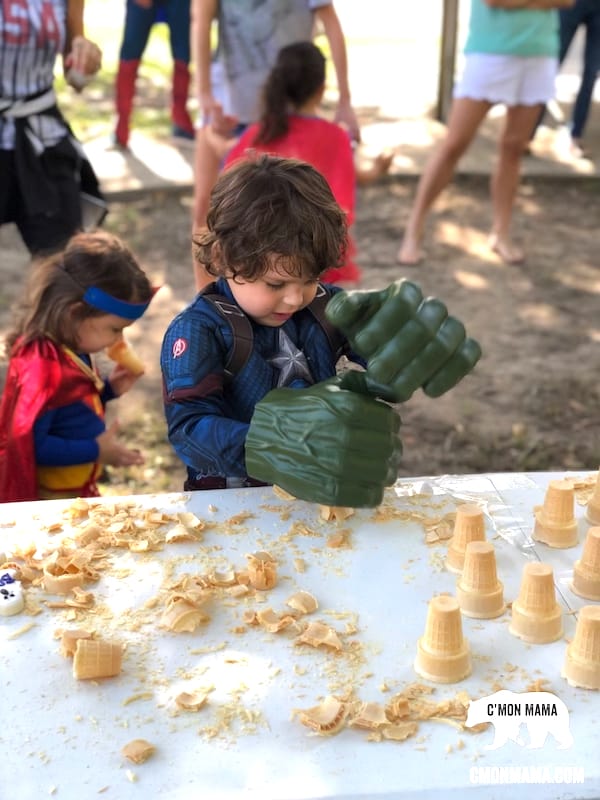 Bonus: The HULK gloves double as a birthday gift! 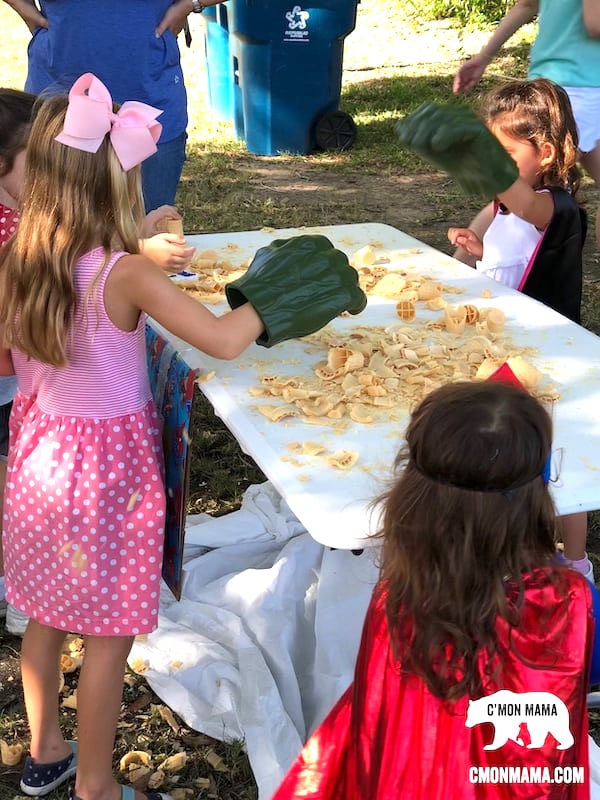 For the ice cream cones, get the cheapest cones you can find. And not the waffle cones. The cheapie ones are perfect & easy to smash! 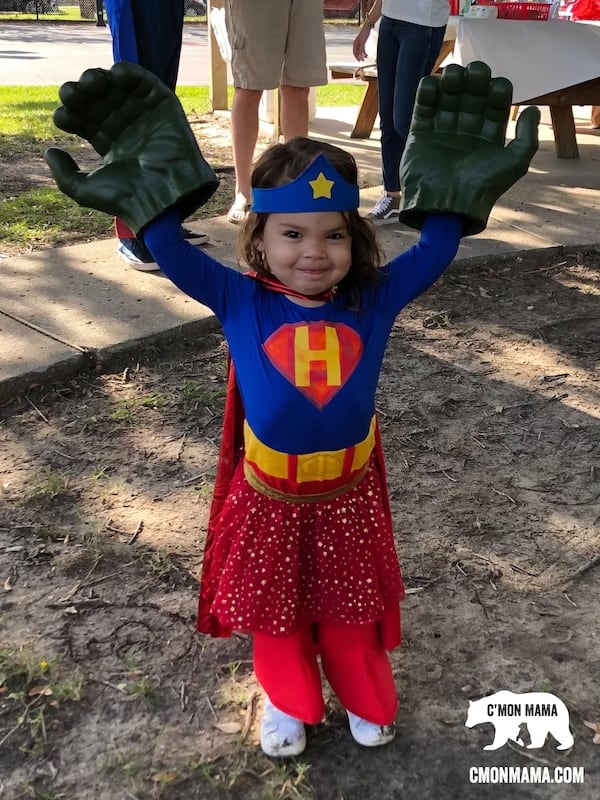 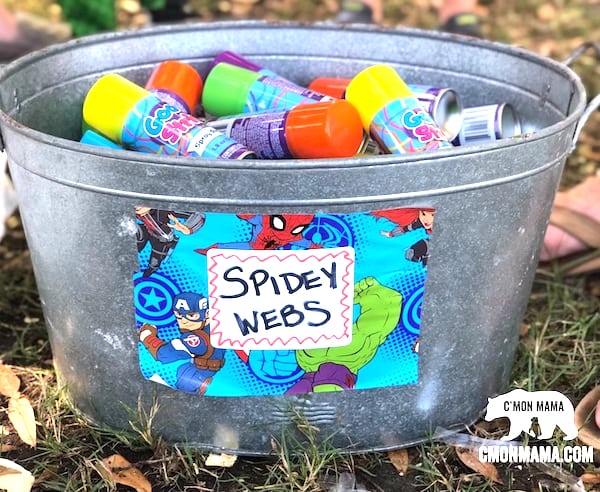 We did a Spidey Web activity where all the kids grabbed silly string aka Spidey Webs & Dad put on a robber mask to play the villain. Then they all went after him. THIS was the (second) highlight of the party. IT WAS SO FUN & CUTE.

(Pro tip: I loaded up on Silly String at the Dollar Store, so if you have one near you that’s definitely the place to get it!) 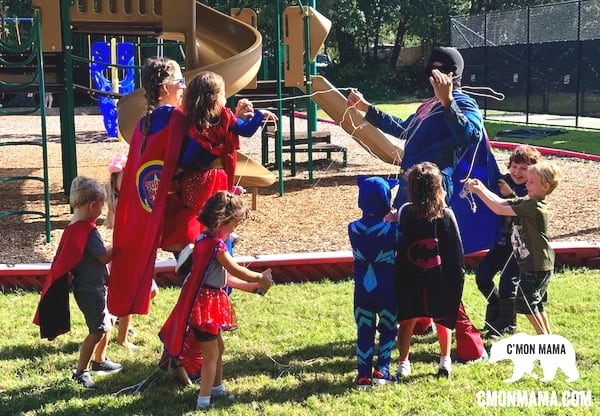 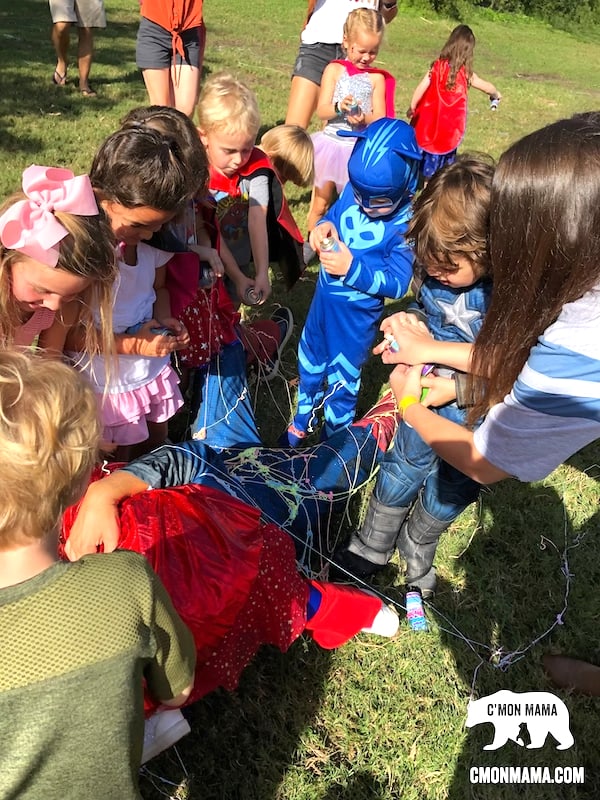 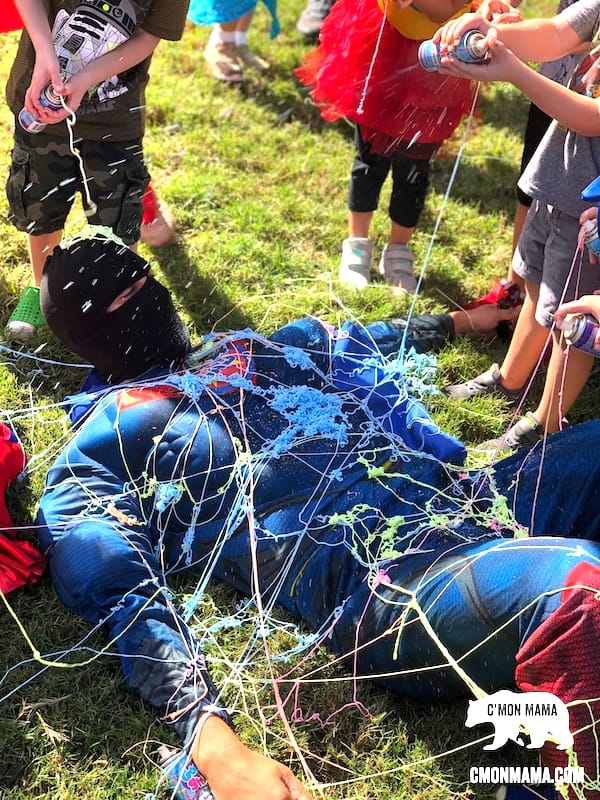 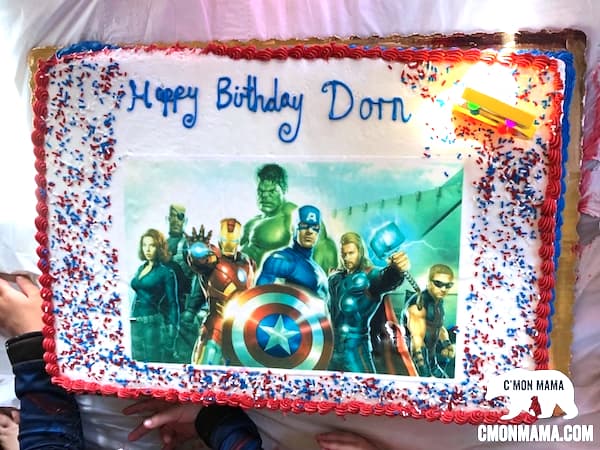 We needed a huge cake for the birthday party (because LBH, I wanted enough for the parents, too!) & no local store had an Avengers Superhero Birthday cake. So, I bought this Avengers Cake Topper & it was perfect. The kids LOVED it. And, it’s sugar so it tasted just like the rest of the cake!

(If you need a custom/larger size than the one I linked above (it’s 8×10 & fits 9×13 sheet cake perfectly), check out this Avengers Cake Topper on Etsy that comes in multiple size options.) 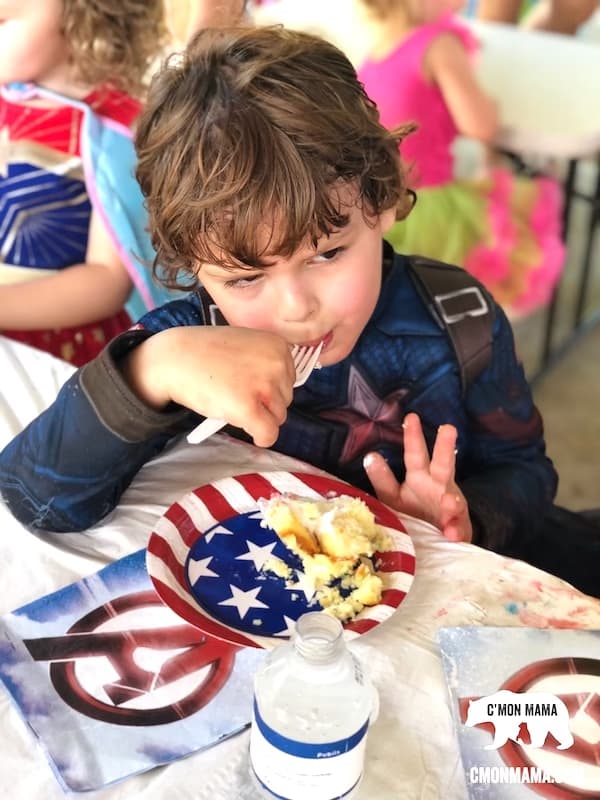 My son has a special love for Captain America (is it obvious?) so I went with this 50 pack of flag plates that mimic Captain America’s shield. He loved them & they were super cheap. But, I also got these Avengers plates for his family & school bday parties.) 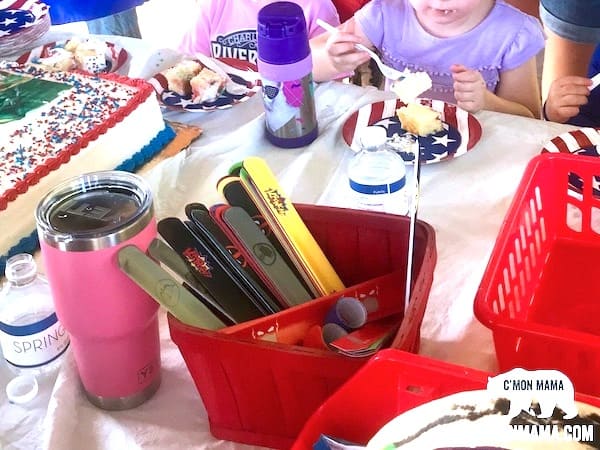 We had Superhero Slap Bracelets as the party favors & the kids ended up having a ball with these. They were so much cuter than they look in the picture & had all the fave Superhero logos!

And then for our own little family Superhero Birthday cake, we had a smaller but equally as awesome cake! 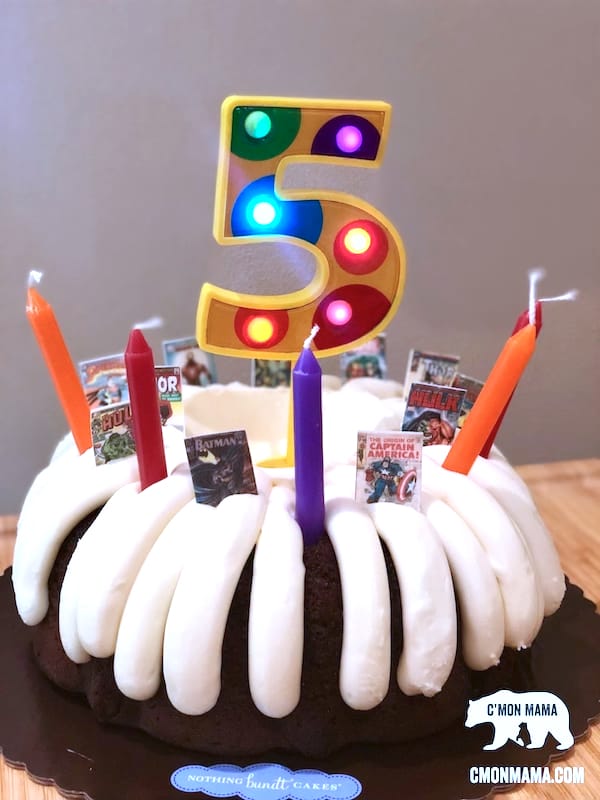 My fave birthday cake/party find for every party & age is without a doubt these big birthday candles. They are like XL versions of a classic birthday candle. They make any cake or cupcake look so much more festive. And you can reuse them again & again.

The flashing 5 light was so fun & added so much to the cakes! We used it on the Superhero Birthday Party huge sheet cake and the smaller, delicious cake from Nothing Bundt Cakes. It comes in #s 1-9. It’s not a candle, but it’s perfect as a topper or even just table decor.

And these Comic Book Cupcake Toppers from Little Hope Cakes on Etsy were beyond awesome! We used them on the cake for our family birthday party & we couldn’t get over how perfect they were. They would also be SO precious on cupcakes. Shipping was fast & the quality was excellent! 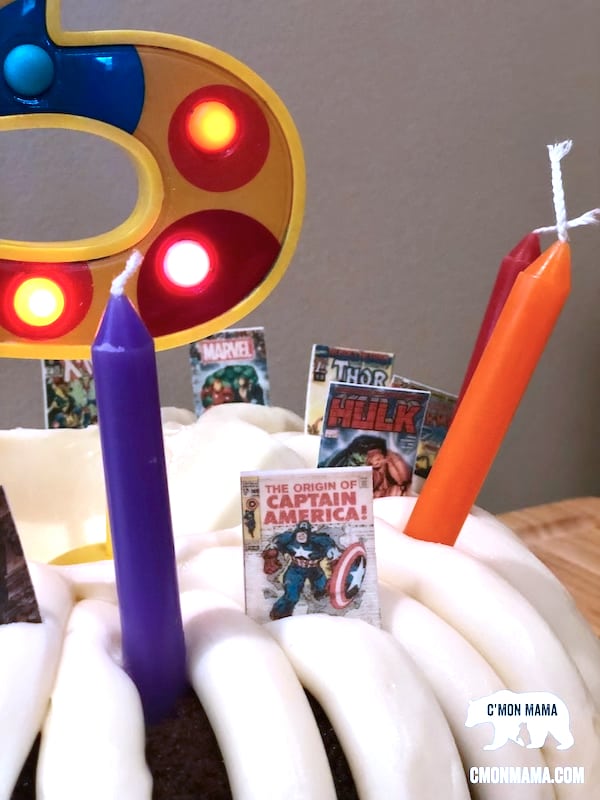 This Superhero Birthday Party turned out to be the most fun kid’s birthday party I’ve ever had (or been to!). It was adorable, exciting & original…and the kids had a BALL!

It was also super easy to put together the 2 fun party activities—the HULK smash & the silly string Spider Web game were the crowd favorites for sure! I usually hesitate to do any kind of “organized game” at parties because that really just means more work for Mama, but this was like the opposite. The kids just got to go crazy with it & I’m so glad I did them because I think they totally made the whole party.

We also had a big box full of extra Superhero masks & capes for all the kids. I forgot to snap a picture but it was great to have out for the kids who didn’t come in costume. The kids had a field day picking their “look.”

Another fun addition to a Superhero Birthday Party would be a piñata! We didn’t do one because although there are a ton of awesome Superhero piñatas, I couldn’t find a villain one & my son would not have wanted to destroy one of his beloved Avengers heroes. (Is anyone else’s kid like this?) BUT, had I been able to find a Thanos or Electro piñata, he would’ve gone nuts!

Oh, and don’t forget this Avengers Balloon Set! It was perfect & the shield balloon is HUGE! Also, it’s such a great price for what you get! We had our Superhero Birthday Party at the local park & this balloon set was the perfect way to show guests where to go.

Because we all know who the real Superheroes are. (ahem, I’m talking about us Moms.)

PIN THIS FOR LATER! 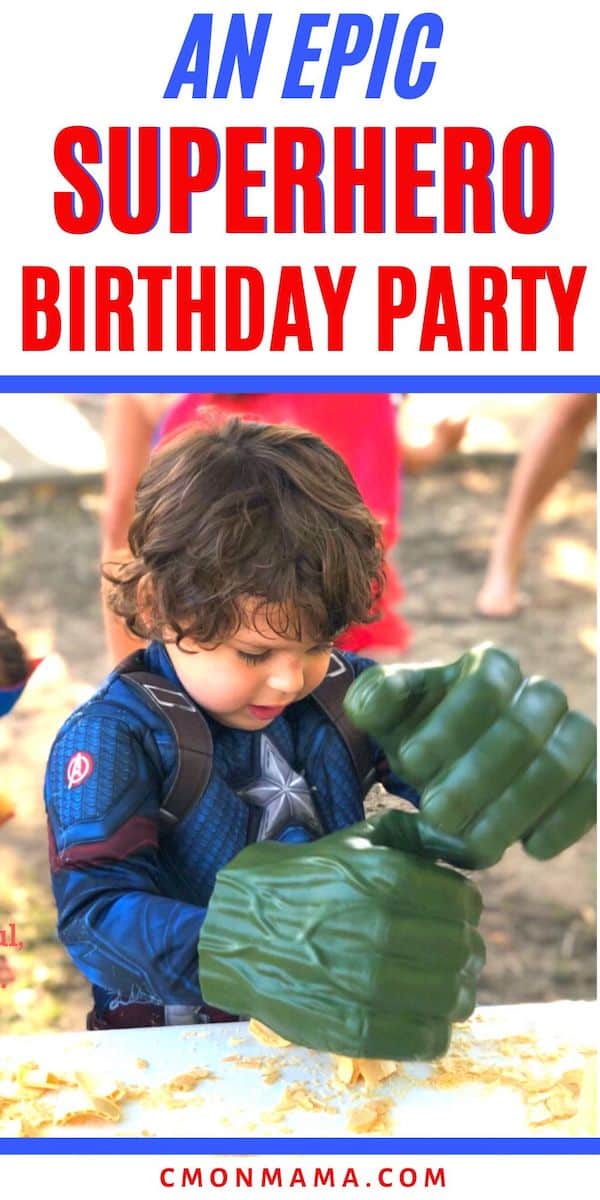 They call me mama

And that's exactly who I am.
I bet it's who you are, too. It's silly to act like Motherhood shouldn't define us. It's the most powerful thing in the history of the world. Let's hope we're defined by something that epic. ❤️